Once I started work, one of the first things I asked for was a new keyboard. (Something about typing a million-word thesis makes you fussy about your keys.) Slightly surprisingly, despite the keyboard I asked for not being on the list of approved hardware, I got it.

Possibly this is because it is, in the manufacturer’s words, “bad ass.”

Yes, I have a Das Keyboard. And not just any old Das, but the Ultimate - the one with no labels. 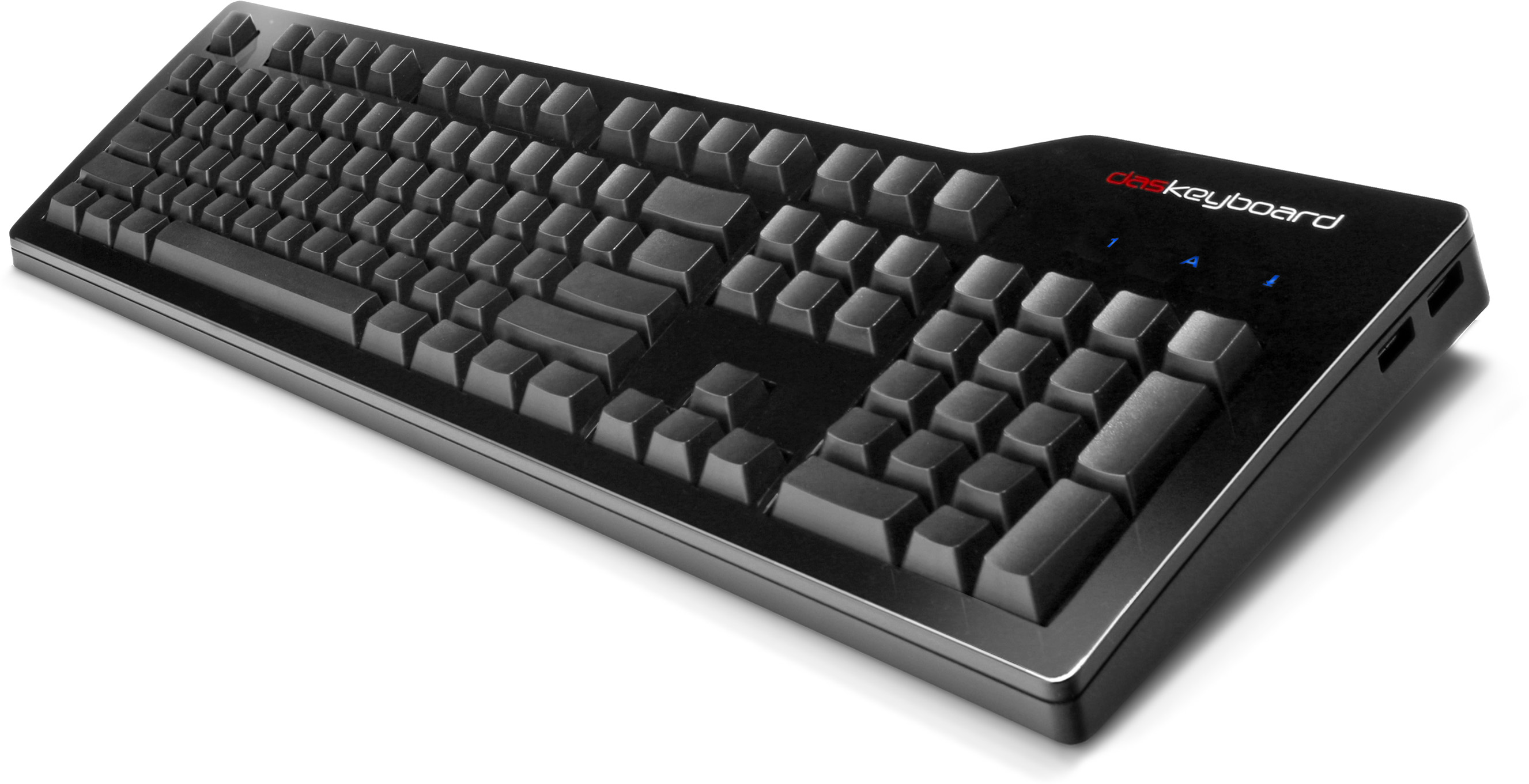 Despite getting the “silent” model, it’s still quite a noisy keyboard, though the noise is plastic-on-plastic rather than the distinctive “click” of a mechanical keyboard. There is no difference in feel between the silent and the clicky, but there’s a huge difference from non-mechanical keyboards. Typing this on my laptop keyboard feels hard and stilted. Every key stops short, and after a while it begins to rattle up into my finger joints. Not pleasant.

But that part is not much of a surprise, since I previously owned a Das Keyboard and knew how good the mechanism was. However, my old one had labels, and so going without was a new experience. So far there have been two benefits.

The first is that “bad ass” is not just the manufacturer’s words, but the reaction of basically everyone who sees it. The box had been opened before I got hold of it, because the person it was delivered to was showing it off to people (which may also explain the late delivery…). I’ve also had a number of people who come into my office simply stop and stare as I type. The “wow” factor really exists.

On the downside, not having labels requires really getting to know the keyboard layout. In my case I already knew the layout, because I’ve been using the two-handed Dvorak layout for the last year. Without turning this into a rave about Dvorak, I think it’s great. However, one thing I’ve noticed myself doing is thinking in Qwerty and typing in Dvorak.

For example, Ctrl+Shift+B is used in Visual Studio to build the current solution. On a Qwerty keyboard, you would press the key labelled “N” to produce a “B”, and hence the keys labelled “Ctrl”, “Shift” and “N” to build. I found myself thinking of it as “control, shift, N” rather than “B”, which became problematic when my fingers started going to the actual key for “N” (labelled “L” on a Qwerty keyboard) instead of the key for “B”.

In short, I was still referring to the labels on my keyboards, despite them being incorrect. The keys for “A” and “M” are in the same place, and using them even after a year of Dvorak still felt more comfortable than other keys. I guess it’s just harder to trust yourself when there’s a sign telling you that you’re wrong.

Switching to a keyboard without labels has revealed just how often I would look at the keys. Cutting that out completely has significantly increased my confidence and reduced my typing errors. That alone, even without the “bad ass” effect, is worth it (blah-blah-YMMV-blah). Considering the amount of typing I do for work, it’s been a good investment, and if they hadn’t bought one then I would have bought my own and not regretted it at all.

Now, Das, about that sponsorship deal…