Code metrics are a popular way to analyse the complexity of our software. For some reason, we are attracted to single-figure summaries of quality, whether it’s lines of code, cyclomatic complexity, or the Pylint score.

Personally, I think using these are about as valuable as judging another person based on one of their visible or measurable characteristics.

Which is to say, an okay metric might get the conversation started, but it won’t help you know them. That takes time and effort, humility, seeking to understand their background, and changing your mind about previous assumptions when something about them challenges you.

Comparing measurements is also just as ridiculous with code as it is with people, except when measuring your own progress. If you know which direction is “better”, then you can tell whether a change moved in that direction.

In that light, my favourite metric for Python code is area under the indent (where less area is better). 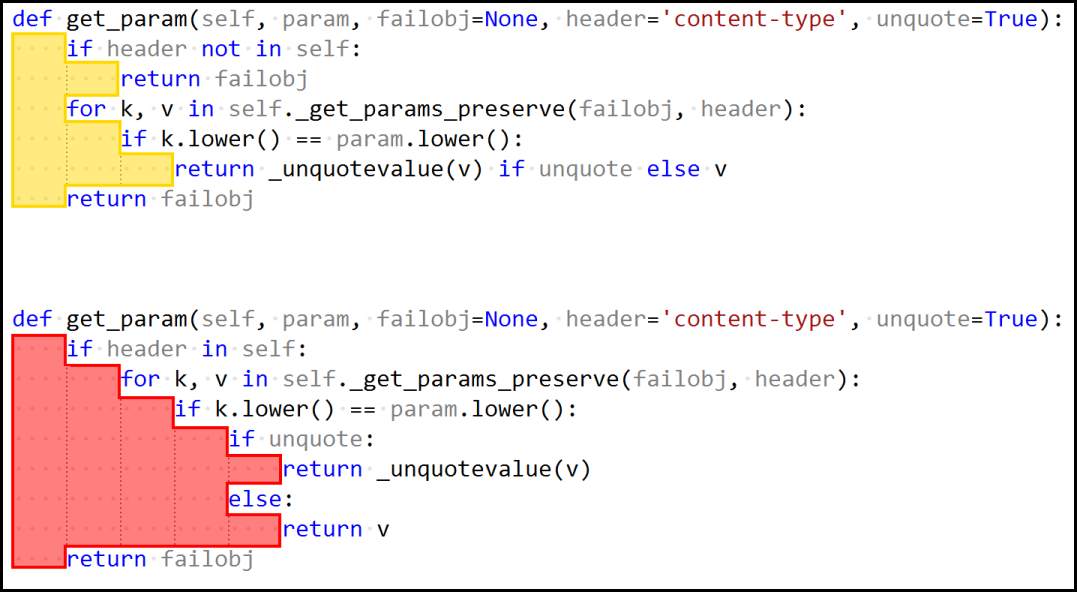 This measurement (or estimate) captures both lines of code and nesting depth, which is more valid for Python than other languages because of Python’s one-action-per-line style. With a reasonable length limit, you also prevent people packing extremely long expressions into one line to try and game the metric.

One thing I am often asked for by Python developers is recommended design patterns. Typically by ex-Java developers, who are used to having well written architectural idioms, and are thrown by Python’s more relaxed approach.

In response, I don’t offer them specific advice. I give them a simple question, which, applied anywhere throughout your entire codebase, leads to the most well designed code.

And as it happens, well-designed code fares well under most complexity metrics (except for “source code bytes on disk”, but those are cheap).

The question is this: how am I going to test it?

How will I test it?

Different languages take different approaches to validating code correctness. Many start with static typing (C++) and some end there (Java). Others extend it further (Ada) and some even further (SPARK), while some rely entirely on the skill of the developer (C).

Python has always relied on dynamic testing: to check whether your code is correct, you run it and see what it does!

This has huge value in terms of expressiveness. It enables duck-typing, metaclasses, and decorators, all of which are difficult or impossible to verify statically. It enables runtime code generation and import search path manipulation. It simplifies embedding into other applications. It enables a range of non-breaking API changes that would be fatal in other languages.

The cost is writing tests.

Thirty years ago, when Python was invented, I’m sure this seemed an unnecessary burden. These days, engineering best practices recommend tests for all code, regardless of language.

But rather than being a burden, writing tests for dynamic code is actually the best way to ensure your architecture is well designed. Not because the tests themselves are magic, but because they interact with your source code from a perspective that essentially forces you into good design.

To set some context, here are a few of my characteristics of well-designed architectures. (You may disagree with these, in which case I will assume you have poorly designed software.)

The following sections will briefly describe what I mean by these characteristics, and suggest how writing tests will help you achieve them. 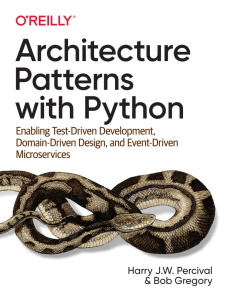 There’s a noticeable lack of code examples, because I’m not trying to teach anything here, merely to provoke deep(er) thoughts. With a bit of luck, some readers will find themselves inspired to take these ideas and present them in a form that’s accessible to more people. For example, Cosmic Python (and TDDwP) got here years ahead of me, and has fantastic books and blogs that get into details about architectures that serve the developer (and not the developer’s ego). If my ideas here resonate but you aren’t sure what to do next, I recommend looking at some of his work.

We spend much more time reading code than writing it. Far more time. It’s a little disappointing how much we invest in our coding tools compared to our reading tools, but that’s a topic for another rant…

Often, you are reading your code because it is doing something wrong. This implies that you know what it ought to be doing, and so are reading with the intent to locate a specific part of the code. Once you locate that piece of code, you’ll want to understand it (so you can fix it). Hopefully it is compact enough to fit in your short-term memory!

Designing for unit tests provides everything we’re hoping for. If you have a long function that does multiple things, you can’t write a unit test for it (since it represents multiple units), so you’ll have to refactor it into a sequence or chain of functions.

Once refactored into separate, unit-sized functions with names, you’ve now given yourself “headings” for each piece of code. Headings are much easier to navigate than a single paragraph of text.

It’s up to you, but if each function has a name that actually represents what it does, you’ve given it a sensible heading. And if each function has a coherent, “works/doesn’t work” testable step of the overall functionality, the name will be obvious (if perhaps verbose), and the place(s) it is called from will be simple sequences of function calls.

When you need to find that functionality later, rather than it being in the middle of a run-on paragraph of code, it will be in a nice, bounded, labelled, unit-testable block.

And yes, this may lead to many functions that are only ever called once in your application. That’s fine, because we’re optimising for reading here, and the most efficient reading happens when you don’t have to read a function at all.

Once you’ve found the piece of code, you likely want to modify it. This means understanding where it fits in the overall sequence, what other components produce its inputs, and which components depend on its outputs and side effects.

Assuming you have already broken up your monolithic functions into coherent chunks of functionality, the next step in making them testable is to be clear about the inputs and outputs.

We’ll deal with side effects later, which means right now we are concerned with functions that return values or mutate arguments (or… ick… both). The former are easy to test directly, and the latter are perfect for unittest.mock.

Your goal when testing function inputs and outputs is to exhaustively prove that the behaviour has not changed. Or if you dislike the idea that your code will ever be changed, you’re proving that the behaviour matches the specification perpetually (not just the first time you translated it into code).

Easily modifying code means being able to quickly detect when you’ve accidentally altered the behaviour. So if it’s tested exhaustively, it’s easier to modify. But even if the tests are not exhaustive, the design implications are useful.

Functions that have complex interactions between arguments, unpredictable results, or too many arguments are not just difficult to tets. They’re difficult to read, understand, use, and modify.

Imagine your function takes eight True/False flags. That’s 256 combinations you need to test, not including genuine error cases. Depending on your patience, you might get through the first ten or twenty before deciding to refactor the function.

Or maybe your function’s stated purpose is to update a parameter’s attribute when it could have just returned the calculated result. You’ve restricted your ability to reuse the function, or to modify the attribute. But the warning sign is that each test now includes setup and teardown, rather than a simple comparison.

If it’s painful to write tests for your functions, it will be painful to modify them as well.

Easy to identify and avoid side effects

Side effects are simultaneously the biggest challenge in software development, and also the entire point of it. While once upon a time producing a single result was a worthwhile benefit of a computer (whether electronic, analog or human), today we rely on multiple asynchronous outputs from any computation, as well as ambient inputs from external data sources.

And unsurprisingly, humans also dislike side effects. When reading code, you have to keep an abstract state machine running inside your head to track what each variable currently holds so you can figure out what operations will actually do. Each external source of data (reading from a file, for example) resets your in-brain state to “I don’t know”. Each external action (opening file) is an operation that resets your in-brain sequence to “I don’t know”.

Side effects destroy our ability to reason about how code will be executed.

Copying a set of files from one location to another? Collect all the metadata about those files in one function, calculate which ones need to be copied in the next, and then do the actual copying in the third function.

This read->transform->apply sequence clarifies which external state is used and where. It forces you to give each function useful names, and determine the structure of data passed between them.

You can now test the transformation on fake data, as exhaustively as you like, without any of the constraints imposed by side effects.

You can more easily find, understand, and fix the code based on the problem description, and debug issues by comparing function inputs and outputs against reality.

Transform logic is more portable, as all platform-specific code is in the reading or applying stages. Your unit test matrix shrinks, even as you test more functions, because each function has more focus. One edge case on one platform impacts one test, not your entire suite.

Most side effects look very much like reading or mutating external state. Updating a field on some global object? Sending a progress message? Checking a configuration option? Make them inputs to your functions - a callback function (tell_user) is better than a global name (print), even if the default argument is actually just the global (def f(tell_user=print)).

One day, you’ll need to capture or suppress side effects for testing. The next, you’ll want to find the code that causes a particular side effect. Later, you’ll need to update your calling code to handle the side-effect differently. In all scenarios, you benefit from making them an explicit part of your interface.

While easily-measured metrics are a popular way to evaluate code complexity, they can never give you the full story.

Regardless of how much code you have or the style it’s been written in, if it’s easy to navigate, easy to modify, and easy to identify and avoid side effects, you’ve likely got complexity under control.

And the easiest way to control complexity in Python is to write tests. Not because test coverage magically results in better code, but because architecting your code to be testable is the same as architecting for humans.